Chris Jordan was born in 1963, and is an artist and activist based in Seattle, Washington. As in terms of mediums, he has had a fair amount of installations and also practices photography. His works and photographs are created around or with the usage of garbage. His aim with his art is to cause awareness to how much people consume and waste, and tries to acknowledge the audience of the detrimental effects it has on the planet. And not only does he acknowledge of how much humans damage the planet, but the wildlife as well.

The photograph below is an art piece titled “Running the Numbers: Portraits of Global Mass Culture”. It is a generated image and portrait of what seems to be a woman curled up in a ball. The image consists of 78,000 water bottles, and come from many different brands from around the world. If you google it, it starts off with a wide shot, but then zooms in to reveal all the different kinds of water bottles. Previously noted, most of his art works include using garbage or even his own utensils that he uses to create a lasting image.

Throughout all his art works, he incorporates garbage as his tool. He does this to bring awareness to the amount of things people consume in their daily lives. A lot of his pieces pose the notion of how Americans (as well as other counties) are very materialistic. By looking at “Running the Numbers: Portraits of Global Mass Culture”, you can see all the water bottles he used to emphasis just how much we consume and waste. Also by looking how the person (in my mind, I see a woman) is presented with the water bottles, she seems to represents Mother Nature, our planet, and reveals the shame that humans should feel from performing these ways of consumption and littering. From using water bottles, phones, cans or even crush cars, he tries to bring awareness of how much we consume, and the detrimental effects it has on our planet. 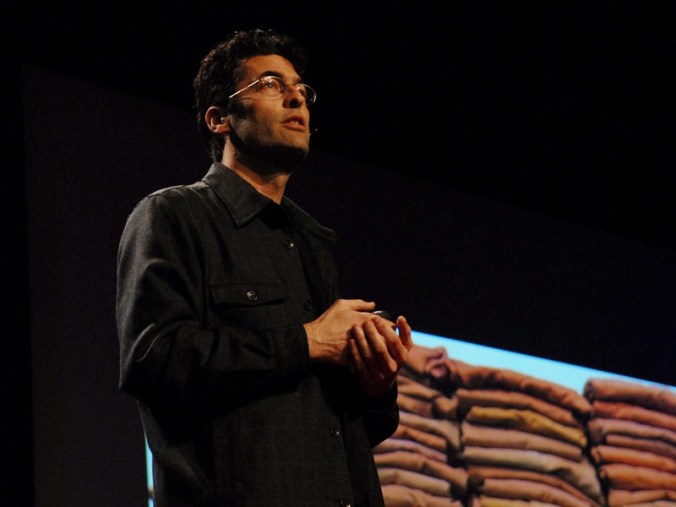 I really like Chris Jordan, and the way he causes discussion for environmental preservation and conservation, as well as acknowledging the audience of how people around the world (for the most part) are materialistic creatures. I feel many people should view his art work because of how it shows the audience of how much we consume and waste, and in turn are hurting our planet. His art work could pave the way for future generations to be more politically involved with issues regarding the environment and pave the way for a more “green” environment.