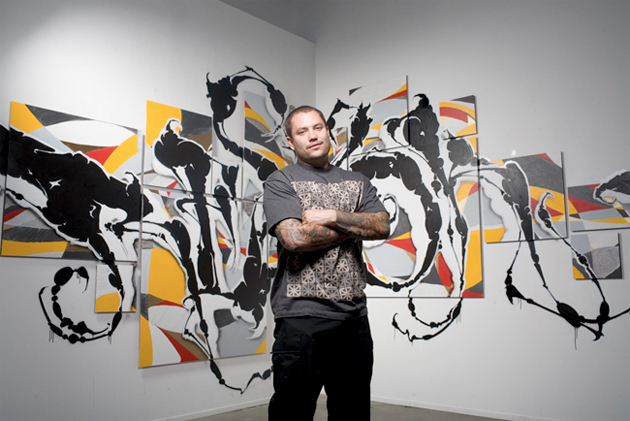 Jason “Revok” Williams was born in 1977 in Riverside, CA, and his art medium is through the practice of graffiti writing and creating murals. His works can be found all across Los Angeles where he was able to gain the popularity that he has today. However, graffiti writing is considered vandalism, where he has even been sentenced to 180 days in prison with bail placed at $320,000 for his “Arts in the Streets” public exhibition. But the community would later provide their support for him, where his prison sentence was reduced to 44 days where he paid a fine of $24,000 instead of $320,000. Revok was also a one-time member of the graffiti crew “Mad Society Kings” or MSK where he was also arrested in 2009 in Melbourne, Australia for his publicized pieces. He went on a creative hiatus after the Los Angeles arrest, where he practiced his graffiti art work in Detroit and revolutionized it even further.

By looking at his graffiti pieces, you can tell it must have took Revok days if not weeks to finish these projects. The above piece was painted on the Bowery Graffiti Wall in New York, NY where the wall has been previously used by other graffiti artists. But you can’t help to marvel at all the details, bright animation of the characters, the formatting and the colors he utilized. A common theme throughout all of his art works is the extensive use of animation, colors and contrast he brings to life in all of his pieces. With his most recent murals, he’s taking on more geometric designs, which he has combined with his utilization of colors bringing about even more spectacular art pieces.

A common reason why a lot of people enter the art world is through expression. This could be said for graffiti artists such as Jason “Revok” Williams, where by examining some of his art works you can tell of his discontent towards society and the way it governs its people. This could also be present by which the very nature of how and where graffiti art is practiced: out in the streets. Where it is considered vandalism, I consider it art, where instead of seeing dull, money consuming advertisements you can see great art work that illustrates some of the issue residing in society or even the individual who created the art piece. Also, another reason why people practice graffiti art is to get their name out and to be remembered. Throughout most (if not all) of his art pieces, he has his tagging name “Revok” illustrated on them, sometimes the name taking up most of the canvas. And by looking at his art works, I can get a sense that the artist has a deep urge to have his works and life remembered by his fellow community and future generations of people who happen to come across his murals.

I really liked studying Revok and his graffiti art work. The idea of having one’s name engraved and to be remembered by society really took a keen interest for me as I examined more and more of his work. It also reminded me of a friend that I know that takes part in graffiti art, where I can recall times of him first stepping through the graffiti art world’s door step, saying such things that he wants to be known for something, and that he wanted to be remembered and famous. I feel that it is important for everybody to stop and examine not just Revok’s art murals, but the thousands of murals that are spread across the nation, for it tells a tale of someone trying to be remembered, and by examining certain murals, you can see how they challenge societal norms and attract our gaze on to what’s happening to certain individuals.